Deprecated function: The each() function is deprecated. This message will be suppressed on further calls in _menu_load_objects() (line 571 of /home/newecon/public_html/includes/menu.inc).

Incessant warfare, assorted environmental calamities, myriad financial crises, crime, terrorism and other social ills remind us that our knowledge of how to design and manage human systems is grossly inadequate. The current international financial crisis and its ensuing economic consequences is only the most recent example of a long line of theoretical and practical failures – failures to anticipate, adapt, respond and develop in a manner appropriate to avoid, eliminate or reverse social crises.

A common thread runs through all these problems. In each case human beings create and apply new ideas and new practices and then become slaves or prisoners of the systems they have fashioned. We create political systems that promote rivalry, competition, domination and conflict. We establish technological systems that make us dependent on the very machines intended to liberate us from labor and leave large numbers of people without a viable means of livelihood. We create monetary systems to support economic prosperity, only to find money dominating and destroying the master it was intended to serve.

These consequences arise not merely because we are novices in a perpetual quest after new and more effective social systems, but rather because of fundamental flaws in conception. The tendency to view the laws of nature as if they were independent of ourselves is a natural product of the mind’s tendency to detach itself from reality and attempt to view reality as an external object. Prompted by the discovery of abstract universal laws governing the physical microcosm and macrocosm, scientists have sought in vain for a comparable set of universal, impersonal principles governing human social behavior. This particular form of imitation is fundamentally flawed because it ignores striking differences between physical and social systems – human systems are conscious and, therefore, capable of adaptation and evolution. The laws of physical nature may be determined by unvarying formulas and physical constants, but the principles that govern our economic systems are the product of ideas, attitudes and values which evolve over time. We human beings make the laws. If we do not like them, we can change them.

Today’s economy moves at the speed of thought, but our thoughts about economy are mired in the concepts of a Newtonian world view, much like those who yearn for a return to the gold standard because they mistakenly regard money as a physical object. Money is a symbolic power of human imagination, a social instrument devised to promote productive human relationships and human welfare. Money symbolizes, unites, travels, raises, organizes and constantly releases higher types of human energy. Financial crises in which trillions of dollars in financial assets literally evaporate into thin air come to remind us of the fact that the real foundation of money is subjective human trust and confidence rather than objective factors. The amount of force needed to lift an object into orbit around the earth can be precisely calculated but the level of reserves needed to ensure financial stability and solvency of a bank may vary from zero to 100 percent depending on public perception. So, too, a counterfeit $100 bill functions just like a legal government-issued note so long as people believe it is genuine; but a government note has no transaction value at all, if the public believes it to be counterfeit. In all matters social, human perception, expectation and attitude are paramount.

Division is another characteristic attribute of mental ways of knowing. Mind divides the whole of reality into innumerable objects and then regards each of these objects as a whole in itself and further subdivides it into smaller wholes. The more it divides, the more it acquires precise knowledge of each infinitesimal part. At the same time this fragmentation increasingly obscures the relationships and interdependencies between the parts that determine the characteristics and integral oneness of the whole. Mind tries to compensate by piecing all the parts back together, but what results is more like an inanimate mechanism than the living social reality it seeks to represent.

The problem of fragmentation is especially acute in Economics. Society is the whole, of which economy is a part. Economy is a whole of which money, markets, and employment are parts. When monetary systems are regarded as things in themselves and ends in themselves, they produce aberrations that not only threaten the underlying economy which they are intended to serve, but the entire society of which economy is merely a part. The central goal of society is human welfare, not financial speculation. Financial systems are intended to support economy as a means of serving the overall welfare of humanity. When they fail to do that, they fail utterly. To argue that we are forced to accept this situation due to incontrovertible economic laws is irrational.

To mistake any of the parts for the whole or allow it to dominate the whole of which it is a part is a formula for perpetual crises and enslavement. Human beings are the creators and utilizers of all social systems. It is we who fashion the technology, formulate the regulations, channel our energies for productive purposes, and trust in the monetary symbols and systems we create. It is our ideas, aspirations, understanding, opinions, decisions, attitudes and sentiments that determine how these functional elements work and why they often fail. A human-centered economics must form part of a science of society as a whole with human beings as the central principle and focus.

We are stuck with the laws that physical nature has given us, but if we don’t like the laws governing our social systems, we always have the power to change them. We may not know why the material world was created or who created it; but we know very well the purpose for which social and economic systems have been fashioned and who created them. Therefore, we have every right to question not only the results these systems produce, but also the principles and underlying premises on which they are based. Society is entirely a human creation and therefore it must be subject to our will, if only we chose to exercise it.

A View of the Whole

Constructing a comprehensive, integrated perspective of economics as one aspect or expression of human social activity is a challenging task.  To be comprehensive, it would have to take into account a wide range of factors as depicted in the table below: 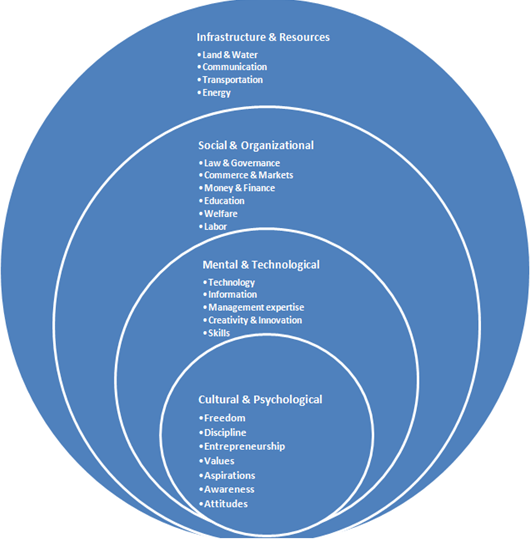 An integrated perspective would have to depict not only the full range of factors that determine economic development and performance, but also their interrelationships and interdependencies. All these factors are only various expressions of more fundamental social processes. The foundation of all these processes are principles governing the functioning of the social collective and the role of the individual as leader and member of the collective. We have to also take into account the fact that human systems are constantly evolving consciously or subconsciously in response to new or changing ideas, information, opportunities, challenges, discoveries, attitudes and perceptions. Therefore, our conception must ultimately be based not only on knowledge of the fundamental components but also on knowledge of the process by which they and the systems they constitute grow, develop and evolve. Knowledge of those fundamental processes will give us the power to refashion or evolve the systems to better meet human needs.

Formulation of a comprehensive, integrated conception is not sufficient. This conception must have the power to generate positive practical results -- to eradicate problems and create opportunities. In social systems, that means we must be able to translate our conceptions into more effective forms of social organization and we must be able to fashion effective strategies to effectuate the transition.

The power of a wider theoretical formulation may be best demonstrated by application to a practical problem such as employment. In yesterday’s New York Times, Paul Krugman has stated that there is nothing more the Obama administration can do to address the problem of unemployment in America. What he means, of course, is that there is no more money available for macro-economic stimulus at the present time. Unfortunately, most people may be under the impression that there is nothing else that can be done either. Bernard Lietaer argues persuasively and his work demonstrates that even in terms of money, there is ample scope to address the problem through financial innovations such as complementary currencies.

Viewing employment in a wider social context, the potential remedies are far greater. New theory can educate the public to recognize that we have the power to eliminate unemployment and to demand acceptance of employment as a fundamental right of every citizen. This will release social energies and galvanize public opinion to address this issue more seriously. That in turn will place pressure on government and other agencies to openly commit to the goal of full-employment and to adopt more aggressive, pro-active strategies. These may include both traditional and novel strategies such as refocusing the educational system to promote internet-based, self-employment opportunities that abound in the New Economy; accelerating the speed of decision-making within government and business to increase the velocity of social transactions; instituting vocational training programs to eliminate the mismatch between the skills of the work force and the needs of the economy; utilizing the knowledge of retired workers to upgrade the educational system at all levels; promoting entrepreneurship and providing management counseling to reduce the extremely high failure-bankruptcy rates among small businesses which are the largest source of new jobs; adopting economic strategies to complement the strengths of other countries, etc.

The task of formulating a human-centered science of economics or society is one which may exceed the capabilities of any single group. It will require a multi-disciplinary approach that combines and integrates many perspectives and seeks for a common foundation that synthesizes economic, political, legal, social and psychological factors and processes into a single unifying framework. Once a draft framework has been developed, we can seek to involve like-minded, complementary groups to form an umbrella organization for the evolution of a new generation of economic and social theory.